I trained a client who recently got out of a long sexless relationship. He had some success after the workshop and here is what he had to say: 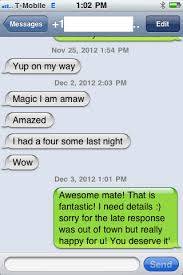 Magic Leone is amazing. If you are thinking about the program, you will not be disappointed. He goes deep into your soul, rips out the bullshit and lets you fill it with who you are.

Thank you Magic. I am forever indebted.

Here is the screenshot of his email:

When I first met him he said nature owes him lot of sex because of his dry spell. He reminded me of the time I used to date a woman who had just broken up with her boyfriend. One day she introduced me to him and I found out why she got tired of him.

She was the only daughter of a millionaire. When she first met her boyfriend he was carefree and adventurous. She liked this about him. Through him she was able to live an adventurous life and do things she could never do before.

Soon they moved in and all of a sudden he became responsible. He stopped participating in activities, took a job and started devoting full time to make a career.

In short he stopped being the man she fell in love with.

This is a very common thing among men: most men are extremists!

They are either total carefree or they are total planners.

They think polars. They assume that they can be either good or bad.

This was the case with this client. By making one small adjustment he ended up having his first one night stand during the workshop.

Two days later he had his second one night stand.

And five days later he had a foursome.

In this video I explain the behavior that keeps men from getting success and what you need to do to get sexual power over women.