Got An Instant Date During The Training Session!

I was getting a bit drained in the club, so Magic and I went back to the bar from the previous night. I opened sets left and right, and was now too over the top as far as sexual escalation goes. I needed to calibrate down a bit. I did kiss a mom and daughter though

Next we did some game in the casino, and I approached these 2 girls at the slots. Then we did an instant date, and I walked with them arm-in-arm through the casino and everybody was looking at us. It felt like a million bucks. I lost the set at Starbucks because my energy dropped and I stopped kino’ing, but Magic saved it enough for them to invite us out the next night.

Multiple Women Attracted To Me

Life keeps getting more awesome! I wanted to let you know about the last time I went out. There is this club called the Stampede that I go to a lot with my Friend JXXXX.

I have several social circles that I know there along with seeing random friends there all the time. It’s always a good time and when I went last week I met one of JXXXXX friends, LXX (very cute)who was very interested in me.

I was also talking to a girl (also very cute) from another group of friends and I had a feeling she was interested in me as well. Toward the end of the night I had both girls who were leaving with their friends trying to get me to go with them. I basically had to decide which girl I wanted to take home that night. That was one of the best problems I have ever had! LXX, the girl I choose is very Bi and I think that could lead to more good things! (unfortunately I don’t think the other girl was, otherwise…. problem solved!) And I left things well with the other girl so that is still an option later. That night there was a lot of girls making out with girls and having three way kisses with me and 2 girls. It was a good night!

Travis, My friends and I that made the videos and did improv online are going to start up again in January. We filmed several skits and a couple of commercials. One of them was a commercial for the “cold water app”. It’s fuckin Hilarious. We’ll have it on YouTube when we start up again. I’ll let you know.

Talk to ya later 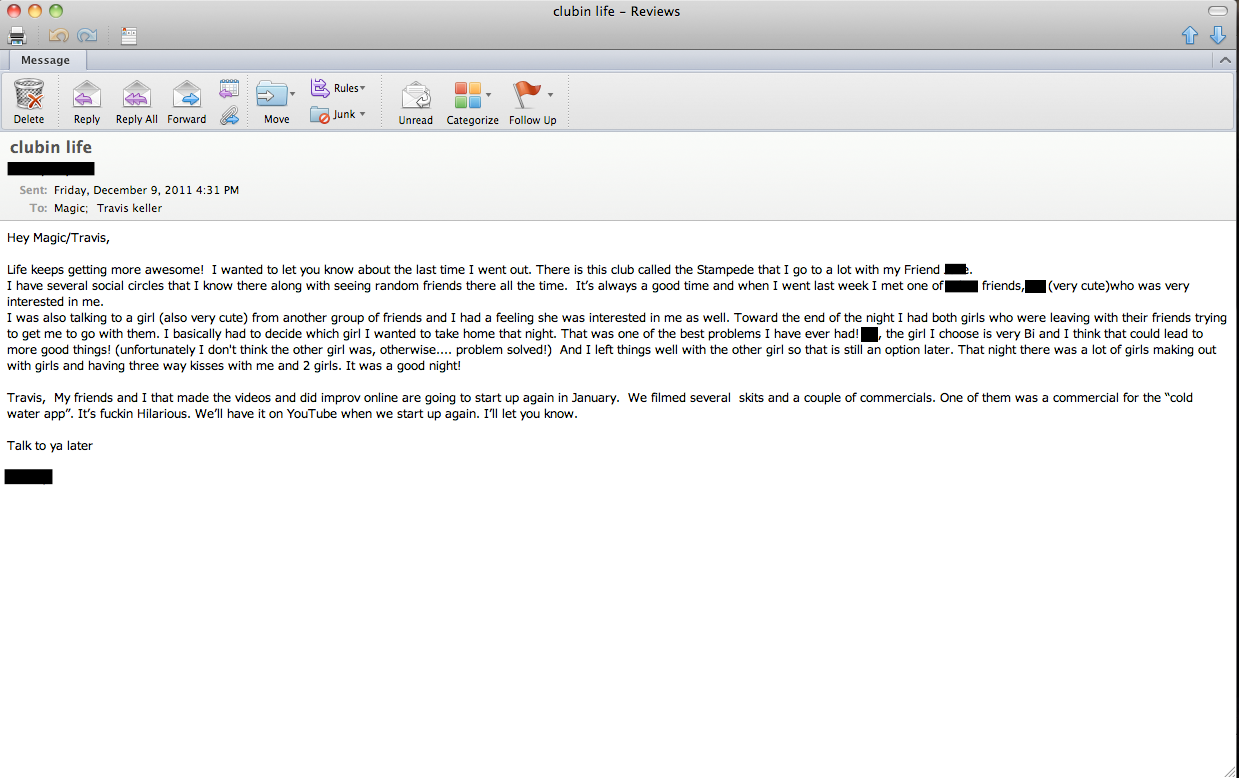