Pulled A Girl Home From The Boot Camp! - Eros

I also just finished a 1-on-1 bootcamp this weekend with Magic, and I’m blown away. I didn’t think I could alter my behavior, attitude, thought processes, and body language as rapidly as I have this weekend. I feel like a totally different person when I’m in a club now. I agree with Quick, Magic teaches way too much to cover in one post, but I will say that watching him this weekend was one of the best parts. On Friday night we were in Hollywood and we went into a bar so that Magic could do a demonstration and then I could try some approaches myself while he watched me.

So Magic approaches two really gorgeous girls, one in particular was absolutely amazing, they’re both standing with drinks talking. Magic’s technique is high energy with a lot of teasing as well as massive amounts of kino. I’ve never seen anyone touch girls as much or as fast as Magic before (and they love it!) He’s got this technique of using his energy level, his playfulness, and his teasing to cover up the fact that he is getting physical FAST. Anyway, the unbelievably gorgeous blond starts playing with her hair after about fifteen seconds and Magic starts reading her palm, another excuse for Kino. His energy is so high and he is so animated that his presence really dominates the area of the bar we are in. After a couple minutes the two girls take off and I think to myself, “OK this guy’s really good”, but then the girls come back a few seconds later with two more of their friends, both of whom were as stunning as the blond, and I decided that he was amazing right then and there. I stood there stunned as these four girls, by far the hottest girls in the bar, all begged Magic to read their palms. The blond girl had apparently gone to get her friends so Magic could read their palms too. Anyway, one of Magic’s teachings is not to become too much of a dancing monkey for girls (an entertainer), so he starts refusing to read their hands and making fun of the girls and they all giggle and grope all over him, begging him to do it. It was unreal.

So then it’s my turn. I try Magic’s high energy approach (which I am totally uncomfortable with at first by the way, I have been a pretty low energy shy guy much of the time, so it felt very awkward at first), and I couldn’t believe how well it worked. Girls opened to me left and right, and Magic watched me all night pointing out the moments that I made mistakes (like ignoring a girl’s friend too much and losing the friend’s support in my goal etc.) I did that a couple times actually and it really threw the energy off of my target because she started getting negative signs from her friend, luckily Magic helped me become aware of that. By the end of the night, I felt like a different person. I was very comfortable approaching, teasing, touching, and becoming sexual, and also comfortable being the high energy, alpha male, social guy that is the center of attention and dominates groups of people with stories, playfulness, teasing, and a great attitude. What a turn around, my God!

And one more little story. Magic trains you in day game as well, and we were out on one of our first sessions and he was helping me with body language, attitude, and eye contact. So Magic tells me to make eye contact with everyone I see and hold it until they look away, then he works on my body language and walk so that I have a much more relaxed, easy going, but dominant stance and walk. So Magic tells me to stand still so that he can walk ahead of me and when he tells me to, I should walk towards him so he can observe my walk. Anyway, while Magic is walking down the sidewalk (we were at The Grove), I stood there, relaxed, dressed a bit like a rock star which Magic helped me with, practicing holding eye contact and smiling at people, and this absolutely delicious girl makes eye contact with me as she’s walking towards me. Normally I probably would have looked away out of fear, but I held it and she held mine and walked straight up to me with a big smile and said “You look like a model standing there!” So I look down at Magic, who has stopped walking and is looking at me with a sly smile. I am not that good looking by the way, I mean I’m OK, but I sure couldn’t be a model, so I knew this girls was just reacting to my confident body language, eye contact, smile, and style. I have never been hit on like that by a girl this gorgeous in my life before. It was exhilarating. Anyway, we flirted, and I pretended that I was a model for The Gap for a while and then I was stumped. Her friends were waiting for her, and Magic was waiting for me, and I let her keep on walking. (DOH!) Magic told me afterwards that I should have taken her on an instant date for coffee, and I really regretted not doing that. Next time!

Anyway, just wanted to second Quick’s opinion of Magic. The guy worked wonders for me this weekend, and I’ve never seen anyone do what he can do in the field. The

After attending your workshop on Saturday, I felt liberated. I went on a first date two days later and had sex with the chick in a public bathroom -with no lies, no bullshitting, and no LMR. The connection is awesome: she texts and calls me back, she invites me into her social circle, and for the first time in years, I have to say, I started a relationship on the right foot.

I absolutely love your dating advice. It’s holistic, authentic, and absolutely works. The strongest message you gave me was this: with enough self-conviction and enough persistence in my pickup, everything will fall into place. I’m convinced that if I focus on being an attractive man who expresses his desires with women, I will create the connections and strong relationships I’ve wanted for so long.

During the workshop, you really shocked me. When I told you about my relationship experiences and goals, you flat out called me on the simple fact -I didn’t know what I wanted. I’ve been in pickup for 3 years now, and it’s amazing that in 30 minutes you helped me spot and solidify my goals into an actionable plan. Thank you! 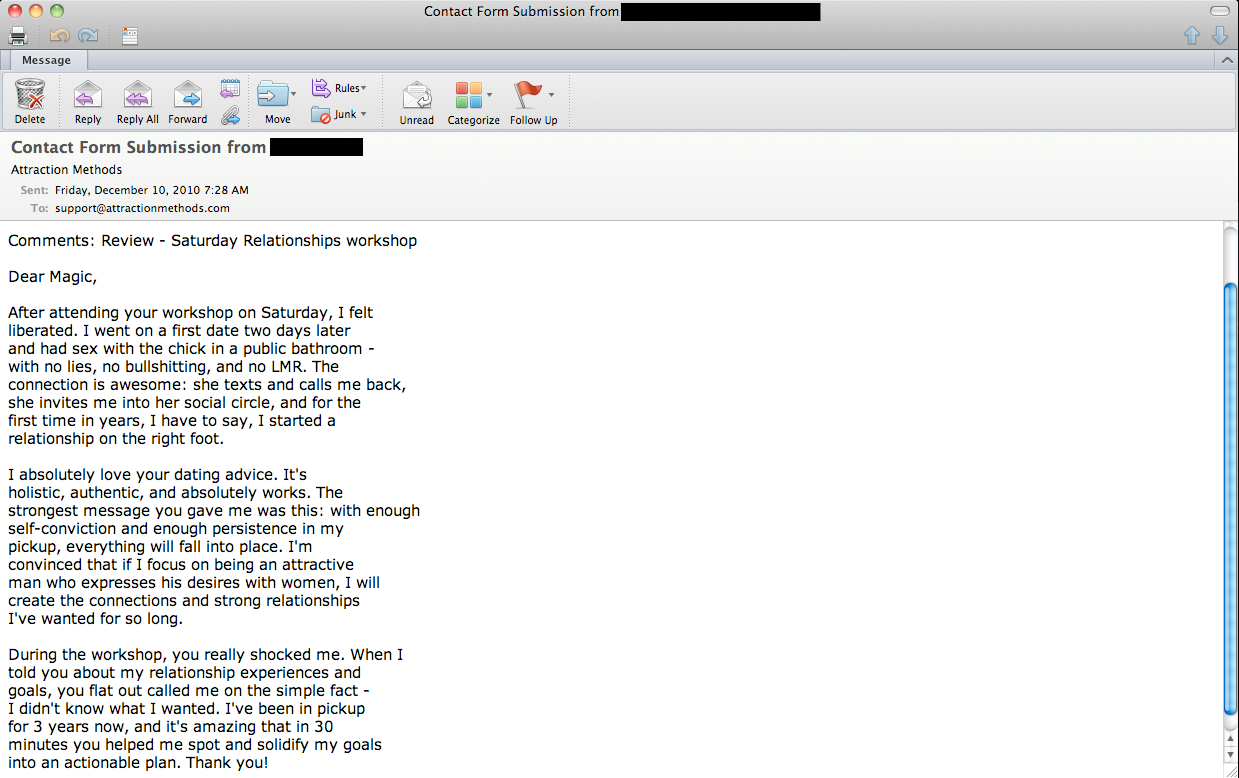