The Last Bootcamp I’ll Ever Take

NOTE: I’m not getting ONE RED CENT out of anything I’m about to say in this post. This is my experience and I wanted to share it.

This is my review of my live training experience of this past weekend. The training was with an upcoming dating coach named Magic.

Magic runs Attraction Methods has written a guide called Social Mastery and holds dating live infield training all over the world for men, but specifically in New York City and Los Angeles unless he goes to their home city for personal coaching.

His name sounds corny… I know.

But, he’s actually a cool, rockstar looking Indian guy that you would have no problem having in your social circle (HINT: normal).

The tools and teaching techniques he has are POWERFUL.

Many of you guys know that it’s been taking me a LONG time to get to a good place with dating and women.

I know you FEEL me on that.

Well, I thought I was making lots of great progress by learning mindsets, cocky and funny, routines, and lots of other PUA tactics.

My progress came crashing down WITHIN 10 minutes after meeting Magic and him explaining why most PUA tactics are simply marketing myths and don’t work for getting women in BED.

That includes all these seduction community fundamentals we just take for granted… like “bitch shields”, LMR, negs, and loads of others.

My game has CHANGED.

Here’s how it went down this past weekend…

Magic took me out on the first night of our bootcamp to get a basic reading of how I was coming across to women and what level I was at. (So he didn’t waste time teaching me stuff I already had handled). He went into a set and specifically showed me how to start touching women to get them sexually attracted to you FAST.

These women MELTED when Magic interacted with them.

It was absurd how easily they fell into his presence, but from an casual observer just looked like a NORMAL conversation between people – but with lots of underlying flirting and sexual energy that might go unnoticed by the untrained eye.

Then, after he got in cozy with these women, he left them and came back to me (a good sign for a coach that he’s willing to ditch girls and actually FOCUS on me). I approached a few groups of women and interacted with them for awhile, Magic came in and instructed me that I wasn’t touching women in the right way fast enough.

Magic said that by NOT touching women early on I was making my conversation, and the attempted flirting I was doing irrelevant and weird.

In my first set, I was easily able to hold an engaging, charismatic conversation with three blondes that worked in the makeup industry around Hollywood.

I’m not from Los Angeles, so I thought I was doing good being able to “handle” these types of women.

Magic let me keep going, observing at a distance but eventually he took me out of the set (very smoothly as to not embarrass me) and then explained that sexual attraction is a strong force UNDERNEATH words and has a limited window for acting on it.

Magic said I had MISSED the opportunity for that group – which I disagreed with. I went back in, ready to show Magic that he was WRONG…

…and was blown out by another guy 5 minutes later. Ha

I had always believed that the amount of time you spent in conversation, flirting, and what not, the BETTER the chances are of getting a woman, or at least a better chance than other guys.

A flood of thoughts came rushing back about all those women I had missed out on before when I hadn’t had the guts (or knowledge) that you need to touch women in the right way EARLY on.

A few hours and some fun experiences later, we wrapped up the night at a diner, and Magic taught me so many more valuable lessons on social dynamics.

The next day, I met up with Magic for lunch to continue our training. Magic went over ESSENTIAL principles that every guy should know about attracting women. These principles have EVERYTHING to do with how to be successful. Without them, well… let’s just say it’s a slow and painful road.

One was the fact that women DESIRE sex just as much as men, if not more.

I challenged Magic and asked that IF that were true, why wouldn’t women be having one-night stands every day of the week with any guy?

But here’s the GOOD NEWS:

Women DO have one-night stands and friends with benefits ALL THE TIME with SEXUALLY confident, non-judgmental, and “cool” men.

Why didn’t I know about THIS?

I think the biggest reason is because I’m not ONE OF THEM.

That was about to CHANGE!

After discussing some limiting beliefs, insecurities and unrealistic expectations Magic instilled a sense of ownership of life and my dating. In that moment the YEARS of stress and anxiety about going out vanished.

It disappeared because I was now being comfortable with who I am, being unapologetic for being a SEXUAL man and knowing very SIMPLE tools that starting making women viewed me in a much more desirable way.

All the things I had learned before this bootcamp were actually ADDING to my anxiety when going out to meet women in bars, clubs and during the day.

Do you think you’d be more or less nervous about giving a MEMORIZED speech to a large audience instead of free flowing on a subject that you enjoyed?

That’s the way it WAS with me.

I added so much pressure to myself, and when I got rid of most of it, I felt like a rockstar.

We then met up later and went through 5 simple skills that I could use that night to really magnify my presence and get women attracted.

He calls them T.E.A.S.E. and you can watch him explain them at www.youtube.com/attractionmethods

By mastering each of those individually, you can OWN THE TOWN.

That night I had some great experiences, and many that I will never forget.

Like how women look at me in a completely different way… (it’s all in the eyes!)

Like when I got a woman’s number while she was ON A DATE.

Like when I made out with another woman within ONE HOUR of meeting her (which was a BIG step up for me).

After 5 phone numbers, a make out and invitation to an exclusive after-party I now realize the NEW WORLD that’s possible.

On Sunday, Magic wrapped it up with some other very compelling techniques when dealing with threesomes, one-night stands and multiple girlfriends.

This guy is the UNTAPPED master of the seduction community.

He gets it on a real level.

He actually gets laid.

He actually gets results for his students.

Magic states that 3/4 of his students last year got laid on the bootcamp itself or within the week after.

That does NOT surprise me one bit.

But Magic is not for every guy. He takes his work very seriously and dedicates his entire weekend to your improvement. He pushes you.

Magic is with you every step of the way and he knows his shit.

If you’re sick of being jerked around by all these dating coaches out there that promise BIG but deliver small results, then check out Magic and Attraction Methods before he gets BIG (so you can get his coaching at the current low prices).

I can’t recommend Magic more highly, come to think of it, I’m not even going to take any more coaching from any other companies because it’s simply not NEEDED.

I feel different, I act different and women now LOVE it.

If your serious about getting this handled, skip the YEARS that I wasted learning marketing myths, by emailing Magic and setting up a free phone consultation to see if you’re a good fit for each other.

He also does one-on-one’s and 4 person bootcamps starting around $1400 or so. Oh, and his products and coaching are ALL with a 100% money-back guarantee

You’ll probably get a lot out of the free coaching call even if you don’t decide to go ahead with the training. I didn’t take the bootcamp for two months after I spoke to Magic, but I wish I had taken it earlier and not WASTED that time.

And you’re probably thinking this is sounding like a BIG SALES PITCH AND I UNDERSTAND THAT.

But, it’s like I’ve just taken a flight on an airline and their service was AMAZING and they got me there AHEAD of time.

That’s the way I feel about Magic.

Would you be telling your friends about the airline that treated you exceptionally, and got you to your destination like NO OTHER AIRLINE had before?

Yeah, you’d be recommending it other people too.

So, don’t WASTE YOUR FUCKING TIME with other coaches, just get this handled and MOVE ON! 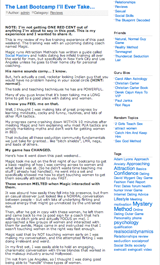